The 22nd Annual Transitions Academy took place February 11-14, 2018 in Orlando FL, and the PECAA Vendor team had the pleasure of attending the two-day event, which featured professional development seminars, Transitions® product education, peer panels, and information on marketing and industry trends for the nearly 1,000 attendees.

The Academy concluded with the Transitions Innovation Awards, which honored industry professionals that have experienced success over the last year with Transitions lenses in a variety of categories. Two PECAA Members were awarded during the ceremony for their 2017 efforts; Best in Training was awarded to 20/20 Visions in Plymouth, WI, and 2017 Eyecare Practice of the Year went to Pacific Eyecare of Port Orchard in Port Orchard, WA. Congratulations to the winners on their incredible achievements!

PECAA had the chance to connect with the award winners on what they felt made their practices stand out. Continue reading to learn what inspired them to excel at what they do! 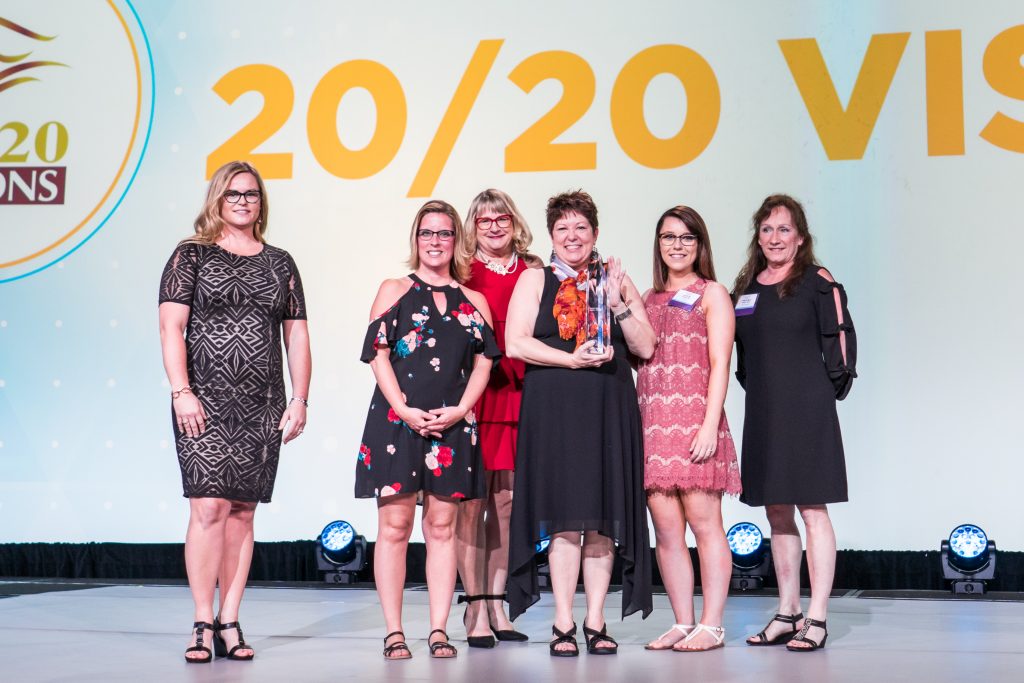 Hard work and dedication paid off for 20/20 Visions in Plymouth, Wisconsin, a practice with 11 staffers, including two optometrists and three full-time opticians.

Sara Sconzert, Optical Sales Manager and Marketing Coordinator, and Donna Baumann, Optician and Optical Operations Manager, managed to get the entire practice on board and took home the award for Best in Training 2017 at Transitions Academy in Orlando, Florida, last month.

The Transitions Academy Best in Training Award is presented to an individual, company, or educator that has shown creativity in developing or offering training and education opportunities.

“The recognition was the satisfying end to a concerted effort” said Dr. Brad Wicklund, an Optometrist at 20/20.

One of the tactics used to educate everyone at 20/20 was giving them firsthand experience with the product. “Our entire staff started wearing Transitions lenses,” Sconzert says. “This helped get everyone excited and able to talk about the lenses.”

In addition, Sconzert adds; “We educated and trained our staff through weekly trainings and minigames using information taken from the Transitions Pro Website.”

“A lot of the work was focused on changing our habits and how we present things to patients,” Dr. Wicklund says. “There’s usually a big disconnect, especially when the patient goes into the optician’s room from the exam, but they aren’t educated about Transitions by the doctor first,” Dr. Wicklund explains. “So it feels like they’re being sold something. But if the doctor explains why it helps and what the benefits are, the patients respond much better.”

Sconzert adds; “We developed what we call a ‘BLT speech’ — or Blue Light Technology speech — as an easy way to talk to every patient about Transitions lenses.”

Dr. Wicklund certainly feels more comfortable speaking to the benefits now. “Nowadays the product is a nice one. The lenses change so quickly, the technology has come a long way, so it’s like a practical substitute for sunglasses. So I tell patients you’re not going to be squinting, trying to adjust your vision to differences in light — the glasses do it for you.”

“Not only do we believe in training our staff on products and technology, we also believe in helping them grow their business skills by giving everyone a chance to learn about and track our business goals,” Sconzert says. “We always strive to give our patients the best and we see Transitions lenses as the best lens choice for any situation because they help protect our eyes from UV outside and harmful blue light indoors and outdoors.”

When asked what advice she would give to others who wanted to succeed in training, Sconzert notes; “Make sure everyone on the team is on board!”

A Winning Focus on Excellence

You can train skills, but you can’t train personality.

That’s the underlying philosophy of Jamie Nelson, Office Administrator at Pacific Eyecare of Port Orchard, Washington, that led to not only one, but two awards in a row from Transitions Academy.

The small practice of 10 on the Kitsap Peninsula, a short ferry ride from Seattle, won the 2016 Best in Growth award and then went back to Transitions Academy the following year to earn the title of Eyecare Practice of the Year.

“We hire people with the right personality, people who are passionate about what they do,” Nelson explains.

Nelson says she believes Pacific Eyecare won because “one of the things they look for is a practice that stands out in a local community. We went beyond Transitions lenses, to promoting healthy eyesight within the Transitions brand and reaching out to the community and the younger crowd.”

Nelson, Dr. W. Earl Buchanan and Dr. Joe Trull spearheaded the training and motivation that led to the award. “We’re more about relationships than selling things, and we call our patients our family. We want the best for them, and sometimes that means bending policy to go above and beyond.”

One example of that is making sure that patients are satisfied with their glasses, or they can return them for a full refund, no questions asked. And while a high standard for service is key, Nelson says winning an award was a big motivator after she and Dr. Buchanan first attended Transitions Academy in 2015.

“It got us fired up to make positive changes and think about how we could be different and set ourselves apart from other eyecare practices,” Nelson explains.

One change was the conversation with patients about Transitions lenses, to educate them more about long-term eye health in the exam room. “We incorporated that change in our ‘baton pass’ — when the patient leaves the doctor to go to the optician,” Nelson says.

“We really transformed how doctors spoke to patients about the lenses as more than darkening and lightening, and more about protecting eyes from UV damage,” Nelson explains. “It’s funny because patients would come out of the room and say, ‘I need those Transitions lenses,’ even before the optician could say anything!”

Another change was educating patients about Transitions lenses differently depending on their age. “Some of our older patients, they said ‘I never want those, they don’t change quickly enough and are too dark for me to use while driving’ — our conversation was, well, let me tell you about the advances in the tech and how they are clearer and better in the car now.”

The staff spoke to younger patients differently, however. Millennials don’t have an existing bias, Nelson says, except “they think they’re what grandmas wear. It’s not something that they consider. Instead, we have to talk about how much we’re on digital devices, and how blue light can damage your eyes. It’s something we’d never talked about before.”

Keeping Staff Motivated in a Variety of Ways

Nelson says from the start, she and Dr. Buchanan brainstormed ways to “ignite our staff.” One idea was a big inspiration board in the staff break room. “We put up a bunch of posters with quotes and statements that made you think more creatively,” Nelson says.

Another was setting measurable goals and tying those into activities like a contest between the doctors to see who could tell more patients about the lenses. “We’d ask them, ‘Did the doctor ask you about Transitions?’ and we kept count on tally sheets.” The winner won a round of golf at the popular Chambers Bay course, and the loser had to be his caddy.

“That made it fun,” Nelson says, “and I think that’s the secret. If you can make work fun and have good people, it changes how your whole business runs.”

Nelson and Dr. Buchanan also shared what happened at Transitions Academy during the first year, which “fired everyone up, so everyone on staff got to go this last year.”

“Now we have post-Academy meetings, and everyone has new ideas to implement in the office to get to the next level,” Nelson explains.

“We want to be the first office to win an award 3 years in a row,” says Nelson. “It’s a true testimony to setting goals and making a plan and putting everything into action.”