You’ve probably heard a lot about myopia control, but just this week we received the announcement of the first FDA approved indication of a device for myopia control. Also very recently, genetic testing took a major advance with the approval of a test for keratoconus. Let’s delve into both of these technologies so you are well versed on the latest advances in eye care. 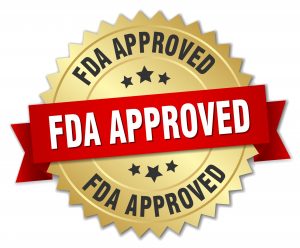 Last week, the U.S. Food and Drug Administration (FDA) approved the first contact lens indicated to slow the progression of myopia. It’s indicated for children between the ages of 8 and 12 years old at the time of treatment initiation. The MiSight contact lens is a daily disposable, soft contact lens designed with center correction but also concentric peripheral rings to focus light in front of the retina. This peripheral defocus is believed to reduce the stimulus causing the progression of myopia. The primary reasons for considering myopia control is not simply cosmesis in avoiding thick lenses with refractive errors greater than -6.00D, but rather preventing complications associated with axial length elongation. These include myopic degeneration, which can manifest as choroidal neovascular membranes, retinoschisis, paravascular inner retinal cleavage, lamellar holes, tractional detachment, macular holes and retinal detachment.1 It also includes glaucoma, which has a higher risk in highly myopic eyes.

An advantage of the MiSight lens is that the child will have their nearsightedness corrected while at the same time slowing the progression of myopia. The safety and efficacy of the MiSight contact lens was studied in a three-year randomized, controlled clinical trial of 135 children ages 8 to 12. In this study children were randomized between the MiSight contact lens versus a conventional soft contact lens. The results showed that for the full three-year period, the progression of myopia in those wearing MiSight lenses was less than those wearing conventional soft contact lenses. More importantly, subjects who used the MiSight CL had lesser increases in axial length. Over the course of the trial, there were no serious ocular adverse events reported.

What’s Needed to Begin Offering Myopia Control to Your Patients?

With this new approval, the MiSight lens from Cooper Vision is an ideal starting technology but you’ll need a few more items to do this well. Obviously you have a phoropter to measure refractive error, but you’ll likely need to purchase something new – an ultrasound device to measure axial length. Sometimes the refractive error can change significantly but if the axial length remains the same, then stay the course with your current myopia treatment. In other words, don’t switch to other forms of treating myopia progression if axial length measurements show no significant change, as things will balance out over a few years. Now, if both axial length and the refraction are changing significantly then consider low dose atropine, which will also works by creating peripheral retinal defocus. This drop once a day has been shown to significantly decrease myopia progression in children within a year.2 According to the same study the various concentrations tested reduced myopia progression in a dose-dependent manner. All three concentrations were well tolerated and showed no adverse events. The results confirmed that the 0.05% concentration was the most effective in controlling progression of axial length and slowing progression of the myopic spherical equivalent. This is another effective treatment but requires compounding pharmacies such as Ocular Sciences or Imprimis to provide the 0.05% atropine drops. Both these compounding pharmacies are national and commonly provide atropine. Also in case you are worried about the cost of an A-scan for ultrasound measurements, which traditionally had cost cataract practices between $40,000 and $80,000, you need not worry anymore. A new A-scan was introduced very recently by DGH Technology, which shows equal resolution, ease of use and retails for about $2990. This technology provides A-scan tracking and myopia control reports, which are impressive. Plus ultrasound has good reimbursement for medical conditions and can be used for measuring nevi every 6 or 12 months to rule out a melanoma, for PVD assessments in symptomatic patients, to differentiate buried drusen from papilledema and in any conditions with a difficult view to the retina, just to name a few applications. 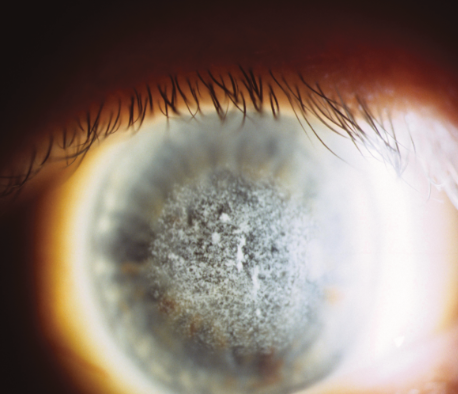 Avellino Labs has announced the release of a new genetic test called Avagen, which includes the diagnosis of all 70 known TGFBI mutations and risk analysis of keratoconus, which includies 75 genes and over 1,000 variant mutations associated with this disease. This becomes a critical test for co-management of refractive surgery patients in particular. Any TGFBI dystrophy, which includes granular dystrophy, lattice dystrophy to name a few can exacerbate after being exposed to uv light —such as that with an excimer laser for LASIK/PRK.

The patient in this image was a 53 yo Caucasian male who underwent bilateral LASIK. He had a negative family history for corneal dystrophy but was told pre-operatively that he had a “corneal disease’ that would not affect the surgical procedure. Genetically confirmed as Granular CD2. Unfortunately the patient eventually underwent a full-thickness corneal transplant OU. This may have been avoided with a simple inner check swab for genetic testing.

We also know that patients with keratoconus, even before it manifests clinically, will go on to develop post-LASIK ectasia if treated by a laser. As an expert witness in a couple such cases, I witnessed very subtle pre-operative presentations that went on to develop full corneal ectasia after a LASIK procedure. Having a genetic test to confirm the diagnosis and avoiding refractive surgery would have been ideal. Secondly we have a way of halting keratoconus progression with corneal cross linking (CXL). The key is to make an early diagnosis so the disease can be halted before keratometry is too advanced, while higher order aberrations or irregular astigmatism is minimal and before apical scarring or other complications of keratoconus. Perhaps the earliest diagnosis is a combination of potential subtle signs (like having a diopter difference in astigmatism between the eyes) with Avagen confirmation. Halting the disease this early would allow a patient to experience normal vision likely for the rest of their life and avoid a corneal transplant. In fact corneal transplants after keratoconus have some of the lowest success rates because the graft has to be so large as to encompass the entire lower cornea. Large grafts cause more potential irregularity and being closer to the limbus increase the risk of rejection. Genetic testing will become a critical component in ocular disease diagnosis and it’s time to start incorporating these tests to help appropriate patients. Many are fully covered by insurance if subtle signs and symptoms are present.

Two very exciting new technologies are now available to us to make a difference in the lives of our patients with the potential for high myopia as well as those with corneal dystrophies and degenerations. Staying ahead of the curve will differentiate your practice, while providing patients with valuable technologies we haven’t seen previously.