Let’s Keep Austin Weird Together This May!

Let’s Keep PECAA Weird in the City that Invented ‘Weird’

We are experiencing record-early registrations, and are ramping up for our BIGGEST PECAA Annual Meeting to-date! We couldn’t be more excited to welcome you to Austin, TX May 16-18, 2019 at the JW Marriott.

Over the next few months, we’ll get you up-to-speed on iconic Austin must-sees, little known bits of history and fun facts as well as the exciting experiences we have lined up for you in this gem-of-a-city in the heart of South Texas.

2019 promises to deliver an unparalleled PECAA Annual Meeting experience – so get ready to ‘Get Weird‘ with us this May!

Who Had the Slogan First… Austin or Portland?

In 2000, Red Wassenich (a librarian for a local community college in Austin) phoned into KOOP Radio’s The Lounge Show to donate money. When the radio host asked why he was contributing, Wassenich replied, “I don’t know. It helps keep Austin weird.” And just like that, a slogan was born and Austin’s international reputation for being weird, zany and slightly off-kilter was established and adopted rapid-fire city wide – becoming the official ethose of the Austin culture.

And yes, for those keeping track, Austin was actually the first to make ‘weird‘ synonymous with their city. Portland, OR quickly followed suit in 2003 when Music Millennium owner Tery Currier – after learning about the movement in Austin – brought it to the like-minded culture of Portland. 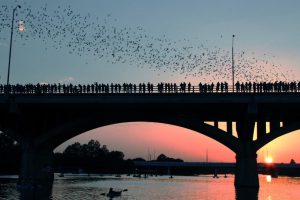 Members attending the PECAA Annual Meeting have a free night to explore Austin on Thursday, May 16! If you’re looking for an authentic ‘Keep Austin Weird’ attraction, the list seems to have no limits. The city houses the HOPE Outdoor Gallery; Chicken Shit Bingo at Ginny’s Little Longhorn Saloon; the Cathedral of Junkconstructed in a South Austin yard; Museum of the Weird; turtle racing at Little Woodrow’s; the spectacle witnessing 1.5 million Mexican free-tailed bats emerge from Ann Richards Congress Avenue Bridge at dusk; and hidden speakeasies like Floppy Disk Repair(also known as the Red-Headed Stepchild).

1) Austin City Limits, the country’s longest-running live music TV show (and the location of our Member Appreciation Party!) began broadcasting on October 14, 1974. Willie Nelson was the featured performer and is actually a long-time resident of Austin (complete with a street named after him, ‘Willie Nelson Blvd‘). 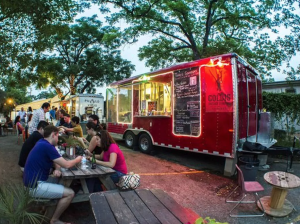 2) Austin is well known for its food truck scene, which started in the early ’90s with a few family owned taco carts on South Lamar Street. Now, there are close to 2,000 food trucks throughout the city.

3) Singer Janis Joplin got her start in Austin at Threadgill’s – a gas station and restaurant where bands played for rounds of beer.

4) Austin has been the filming location for various well-known movies including Miss Congeniality, Dazed and Confused, Boyhood, Spy Kids and Kill Bill: Volume 1.

5) The Circuit of Americas in Austin is the only Formula One race track in the entire United States.

6) In the late 1800’s, a serial killer known as the “Servant Girl Annihilator” terrorized Austin. The killer has been compared to England’s notorious Jack the Ripper. Some even speculate it was the very same man.

7) Love him or not, actor Matthew McConaughey was actually arrested on a drug-related charge in Austin in 1999 for dancing naked and playing the bongo drums. Matthew is also one of the revered celebrity residents of Austin (be on the look-out for a McConaughey siting!).

8) The only legal nude beach in Texas is Hippie Hollow at Lake Travis. Austin is also the only city in the state that doesn’t have legislation preventing ladies from ‘handing it out’ for all to see.

9) Austin is nearly the same size as New York City, over 280 square miles.