Explore the Sonoran Desert in Tucson

As many of you know, PECAA’s Annual Meeting, April 19-21, 2018, is being held in none other than the Southwestern charmer-of-a-city – Tucson, AZ at the JW Marriott Starr Pass Resort & Spa. Can you believe it’s coming up in just a few short months?
There will be a lot to do at our meeting, but hopefully you’ll schedule some extra time to explore & play in the Sonoran desert, or even spend time relaxing at the JW resort – where you may run into some of the native critters and interesting plant life indigenous to the Southwest region!
Here’s what to be on the lookout for… 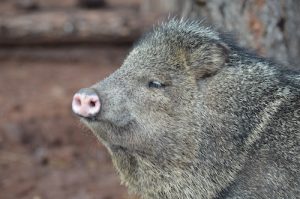 Also known as Javelina’s or skunk pigs, they are a medium-sized hoofed mammal of the family Tayassuidae (New World pigs). They are found throughout Central and South America and in the southwestern area of North America. Peccaries usually measure between 3-4 feet in length, and a full-grown adult usually weighs between 44-88 lbs.
Despite their somewhat intimidating appearance (an oversized, made-for-fiction, red-eyed, rodent-looking-pig), Peccaries are omnivores and will eat insects, grubs, and occasionally small animals, although their preferred foods consist of roots, grasses, seeds, fruit, and cacti – particularly prickly pear – hence their habitation on/in/around the natural reserve that the JW Marriott property backs up to. You can rest assured they aren’t looking to eat YOU!
However, be aware that by rubbing their tusks together, they can make a chattering noise that warns potential predators (or casual hikers such as yourself) not to get too close to their herd, especially if there are babies amongst them. Peccaries also have scent glands below each eye and another on their backs, and they use the scent to mark herd territories, which range from 75 to 700 acres. The pungent odor allows peccaries to recognize other members of their herd, despite their myopic (nearsighted) vision. The odor is strong enough to be picked up by humans, which earns the peccary the nickname of “skunk pig.”

You can book early morning hikes onsite with the JW concierge, and you’ll likely run into a herd of these interesting creatures – get your cameras ready, but take pictures from a distance… these are not mammals you’ll want to run up & pet! Check out these images from our pre-planning site visit – when our planning team spotted plenty of them, up close & personal! 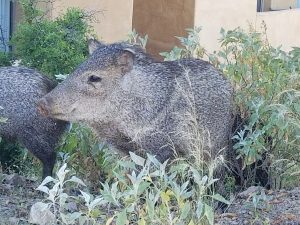 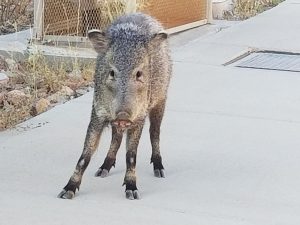 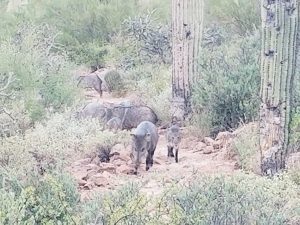 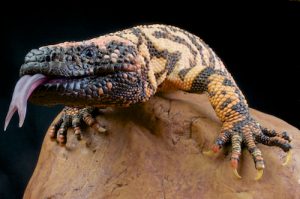 Gila monster (reptiles) are solitary and live in desert and semi-desert areas with just enough moisture to support a few shrubs. Gila monster burrows are commonly found in rocky foothills, as they avoid open areas – which makes many of the rockier landscapes of the hotel property and nearby foothills the perfect home for these lizards.
During cold winter months, Gila monsters stay in burrows dug with their stout claws or even burrows of desert tortoises and have fat stores in their tail to keep them alive during this time. When springtime comes (April in Arizona), they become active & begin to hunt again, but luckily, they don’t love the heat – so they are mainly active during the nighttime hours.
What’s in a name? As the name might suggest, the Gila (pronounced HEE-la) monster has one of the worst reputations in the reptile world. This lizard is often feared and has been described as frightful and repulsive, especially in local folklore. It has been accused of many things, such as spitting venom, leaping several feet in the air to attack, stinging with its tongue, and killing people with gusts of poisonous breath. We’re glad you’re reading this, to learn the truth about these interesting lizards, and what you need to know if you spot one on the JW grounds and/or the nearby natural reserve that backs up to the property.
How to spot them? Gila monsters are the largest lizard native to the United States; they are heavy-bodied reptiles covered with beadlike scales, called osteoderms, that are black and yellow or pink covering all but their belly. They range in 1-2 feet in length and weigh between 5-10 lbs. Be aware that the Gila monster IS venomous; its venom is made by a row of glands in the lizard’s lower jaw. When the lizard bites, small grooves in the teeth help the venom flow into its prey. The bite of a Gila monster is very strong, and the lizard may not loosen its grip for several seconds. It may even chew so that the venom goes deeper into the wound.
A Gila monster bite is painful to humans, but it rarely causes death (whew!). The biggest problem you might have if a Gila monster bit you is trying to get the lizard to release its grip! But you really shouldn’t worry, as Gila monsters tend to avoid humans and other large animals. To warn off potential predators, they open their mouth very wide and hiss – so, be forewarned, it’s advisable to keep your distance from any hissing lizards!
While a Gila sighting might be exciting & something to #hashtag about…as with the Peccaries, you’ll want to avoid running up & trying to pet one of these exotic creatures. 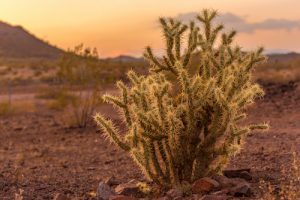 On a lighter (but still prickly) note – let’s talk about the lovely cacti you will experience in the Arizona desert!
A Cactus is a type of plant that can store large amounts of water and survive in extremely hot and dry habitats. There are around 2000 different species of cactus that differ in size, shape, color and type of habitat. Almost all cacti are native to deserts and dry regions of South and North America.
The size of a cactus depends on the species, with the largest reaching upwards of 66 feet in height, weighing up to 4800 pounds (when it is fully loaded with water) and live from 15-300 years, depending on the species.
Depending on the species, Cacti can be green, bluish or brown-green in color, they have a waxy substance on the surface which prevents loss of water and they have spines instead of leaves. The spines can be soft or rigid, straight or curved, arranged in rows or scattered, and reach up to 6 inches in length. The spine has 2 major roles; to prevent the loss of water & keep the plant safe from animals.
Jumping ‘Cholla’ Spines: ‘All the Better to Spike you with My Dear!’
These specific cactus species are an Arizona native and are considered the most plentiful & dangerous cacti in Tucson, meant to admire from a distance to avoid injury. The Jumping Cholla grows 8-10 feet tall & produces beautiful fuchsia-colored blossoms in the spring – but they are covered in sharp spines & masses of fine, irritating barbs called glochids. When the spines touch skin or clothing, the segment comes off of the plant & if it attaches to you, it’s large & fine spikes get embedded in your skin. The reverse barbs make them both painful & difficult to remove.
And just to ease your mind…in reality, these spines DO NOT ACTUALLY JUMP off of the cactus – they earned this name from the way they so easily attach to anything that even slightly brushes up against their sensitive surface as a form of protection.
Removing a Cactus Spine from Skin?
Not a cause for panic, but don’t try to do this on your own; please seek assistance from the JW Marriott Starr Pass team – they will be able to assess the type of spine, and most effective way to remove it for you!

Meet You In the Desert for PECAA’s 2018 Annual Meeting!

We hope all of these native treasures will add a thrilling edge of excitement (and a tad bit of caution) during your journey to the desert – we can’t wait to see you there!