April marks Sjögren’s Awareness Month. As optometrists, most of us are familiar with its diagnosis and treatment options as it pertains to the eye. Few, however, know what it means to actually live with the disease.

My wife was diagnosed with Sjögren’s Syndrome (SS) approximately 10 years ago. It is my hope that by sharing her experiences, you will better be able to relate to your SS patients and offer them guidance you might not otherwise have had to give. 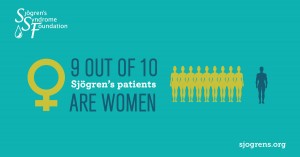 First, a quick review of the condition.

Sjögren’s syndrome is a relatively common disease affecting approximately 4 million Americans; 90% of whom are women. About half of the time it occurs alone (Primary Sjögren’s), the other half (Secondary Sjögren’s) occurring in the presence of another autoimmune connective tissue disease such as rheumatoid arthritis, lupus, or scleroderma. Symptoms of Sjögren’s mimic these other diseases, making it easy to overlook or misdiagnose. On average, it takes nearly 3 years for a patient to receive a diagnosis of Sjögren’s. While most of us think of the disease as one causing dry eyes and mouth, Sjögren’s can affect any of the body’s organs or systems. Since SS is principally a disorder in which the moisture-producing glands do not function correctly, I often explain it as a disease that dries the body from the inside out. It can lead to dysfunctions of the blood vessels, kidneys, gastrointestinal system, lungs, pancreas, liver, and even the central nervous system. Symptoms can vary day to day. Over time they can remain constant, worsen, or, rarely, go into remission. Some patients experience mild discomfort while others suffer debilitating symptoms that greatly impair their daily lives. Sjögren’s patients also have a higher risk of developing non-Hodgkin lymphoma; 18.9 times higher than in the general population, with a median age at diagnosis of 58 years. The mean time to the development of non-Hodgkin lymphoma after onset is 7.5 years.

What is it like to live with Sjögren’s? My wife will tell you one of the most difficult things about having the disease is that no one realizes just how terrible she feels all the time. Because there are no outward signs of the disorder, to others, she does not look sick. She is constantly plagued with fatigue and this fatigue can be so severe that she simply has to stop what she is doing. Muscle and join pain are also at the top of her list of complaints. Even holding a pen and writing can be difficult for her. Sometimes she finds it difficult to speak because her mouth is so dry. Her vision often blurs because of a compromised tear film. Thought processing can at times become muddled, a common symptom SS patients refer to as “brain fog”.

My wife is actually lucky because her symptoms are not as bad as other Sjögren’s sufferers. I had a patient who told me she avoided going to friends’ homes to eat because the dryness in her mouth made her very prone to cuts, resulting in excruciating pain. She’d had root canals on almost all of her teeth and most had been capped as well. For over 30 years she suffered admonition from her dentist for not effectively brushing and flossing. Neither she, nor her dentist, realized it was the disease and not her poor hygiene that was the root of her problems. Another patient considered neuropathy to be her major SS associated complaint. She described the feeling as if her hands and feet were on fire. She was no longer able to work as typing had become nearly impossible to do at all much less do efficiently. She’d also developed interstitial cystitis also known as painful bladder syndrome causing urinary frequency, urgency and pain.

From my own experiences with the disease, I can tell you that living with Sjögren’s means being more understanding of my wife’s moodiness. I constantly remind myself that when she is impatient with me it is often because she is feeling particularly lousy. Of course, there are times I deserve her cross looks or sarcastic comments, but most of the time it’s the Sjögren’s. I’m a person who doesn’t have much patience for people who say in 15 sentences what they could say in 3. When she rambles on, I need to tell myself it’s the brain fog slowing her down. 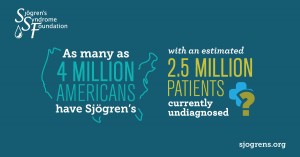 As an optometrist, I can promise you that you will have a Sjögren’s patient sitting in your chair on more than one occasion. Most likely it will be with a complaint of dry eyes. Ask a few extra questions aimed at uncovering Sjögren’s syndrome. Ask them if they suffer from joint pain, or have difficulty formulating their thoughts or if they tire easily. You might be the expert who finally figures out what it is that’s behind all the problems they’ve had for so many years.

If you suspect SS, refer your patient to a Rheumatologist who actually treats SS; not all do. Also direct them to the Sjögren’s Syndrome Foundation website at www.sjogrens.org and strongly encourage them and their significant other to join a support group if the diagnosis is confirmed and your community has one.
Most Sjögren’s patients learn to live “normal” lives despite their disease. Having a good support group with understanding family, friends, and doctors makes learning to do so all the easier.