PECAA Gives…Join us as we make our vision a reality by helping us leave a positive, lasting impact on the communities where we come together. 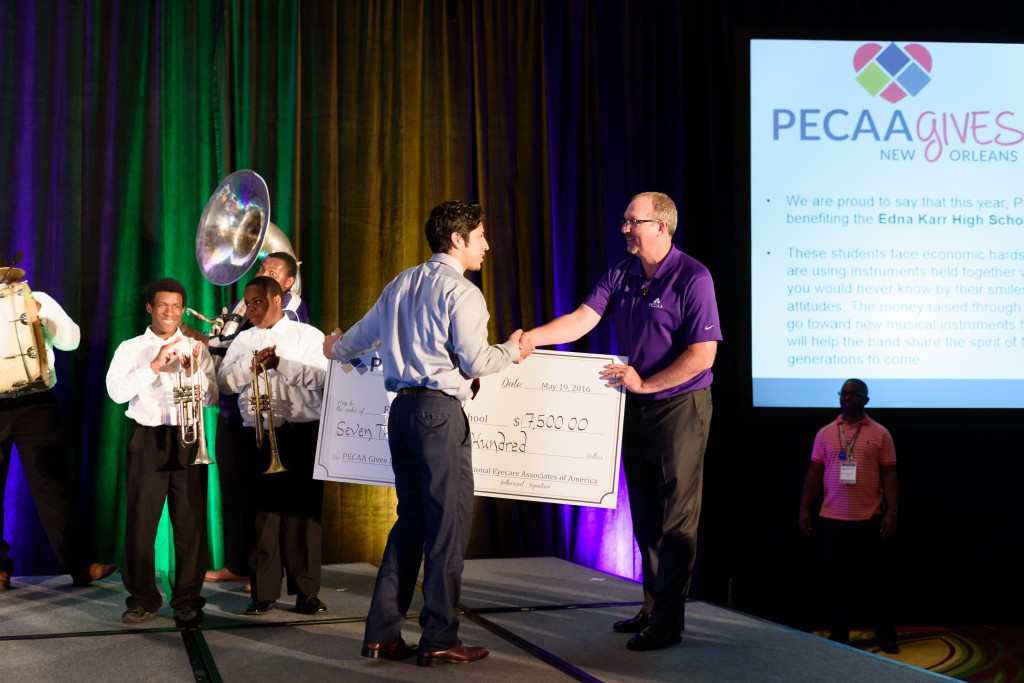 Thank you to everyone who donated!

Thank you to everyone who generously donated to PECAA Gives to support the Edna Karr High School marching band in New Orleans! We were so proud to present a check for $7,500 to the music director, Chris Herrero, after the band’s performance at the Annual Meeting. The money raised will go toward new musical instruments for the students.

The 2016 Annual Meeting was held in New Orleans, LA, a city rich with culture and tradition. While preparing for our meeting, PECAA’s event planning team had the opportunity to experience the music of the Edna Karr High School marching band. Their unbelievable talent and spirit quickly captured our attention and stole our hearts. As we watched them rehearse, we couldn’t help but notice the duct tape holding some of their instruments together. And yet…the spirit of these kids was infectious…their shy smiles, their proud stance, their positive interaction with each other, and the obvious respect they have for their teacher …they played their hearts out – it was a very touching experience. We all came away determined to find a way to donate to this amazing gem-of-a-program in the heart of NOLA.

As a rising star of this city, this particular school program has been featured by NPR, and was also recognized by England’s Lord Mayor of Winchester, Catherine Longworth, who recently invited the EK marching band to march and perform in London’s 2015 New Years Eve Parade – a high honor. Despite the economic differences among these kids, and some of the dire circumstances they face at home – Edna Karr has an impressive 98% graduation rate.
The EK music director (Chris Herrero) is a graduated student from the high school and returned four years ago after completing college to give back something vital; something life-altering to these kids – music. In the four years since his return, the program has more than doubled, along with well-deserved recognition and local awards. The music program has become a viable vehicle for kids to earn scholarships and overcome, against stacked odds; it truly is a lifeline.

You can still make a donation!

We presented a check for $7,500 during the meeting and we are still accepting donations online! Give back to the community of New Orleans by donating to the music program of Edna Karr High School. The money raised will go toward new instruments for the students and your support will help them continue to share the spirit of New Orleans for generations to come!